30 replies to this topic

A common problem many growers face is, how to maintain a diverse range of strains, without firstly, increasing plant numbers and secondly, without extending veg room grow spaces. The answer to this question may lie in the technique known as grafting.

Grafting is used in many plant nurseries to produce consistent fruit in plants such as apples, passion fruit and citrus. And may also be applied to cannabis. In the citrus industry a variety known as a fruit salad tree is often produced. A fruit salad tree may contain various species of citrus on the one root stock, so you can have a single tree that produces; oranges, lemons, mandarins and grapefruit, reducing space requirements and workload for the home gardener and risk, for the cannabis grower.

For this thread,  Hindu kush x Cindarella 99, Cindarella 99 and Sweet Special were grafted onto a bootleg Super Silver Haze rootstock. In the fruit growing industry, all foliage is typically removed from the rootstock, and a clone (or scion, as it is termed for grafting) from a known good producer is grafted, however, in this case,  the foliage of the rootstock plant was kept. 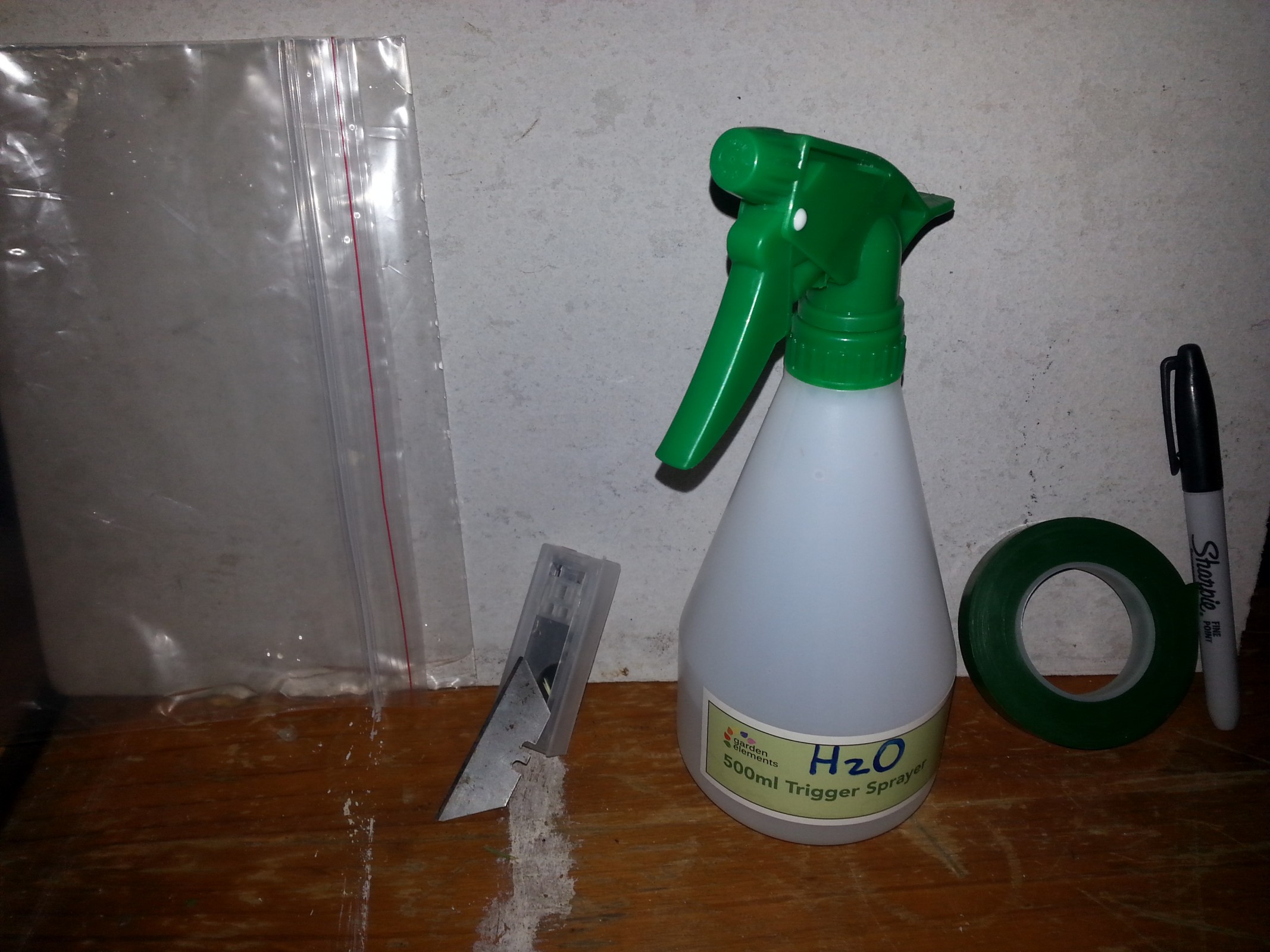 Cuttings were taken from the lower branches of the HK99, C99x and SS 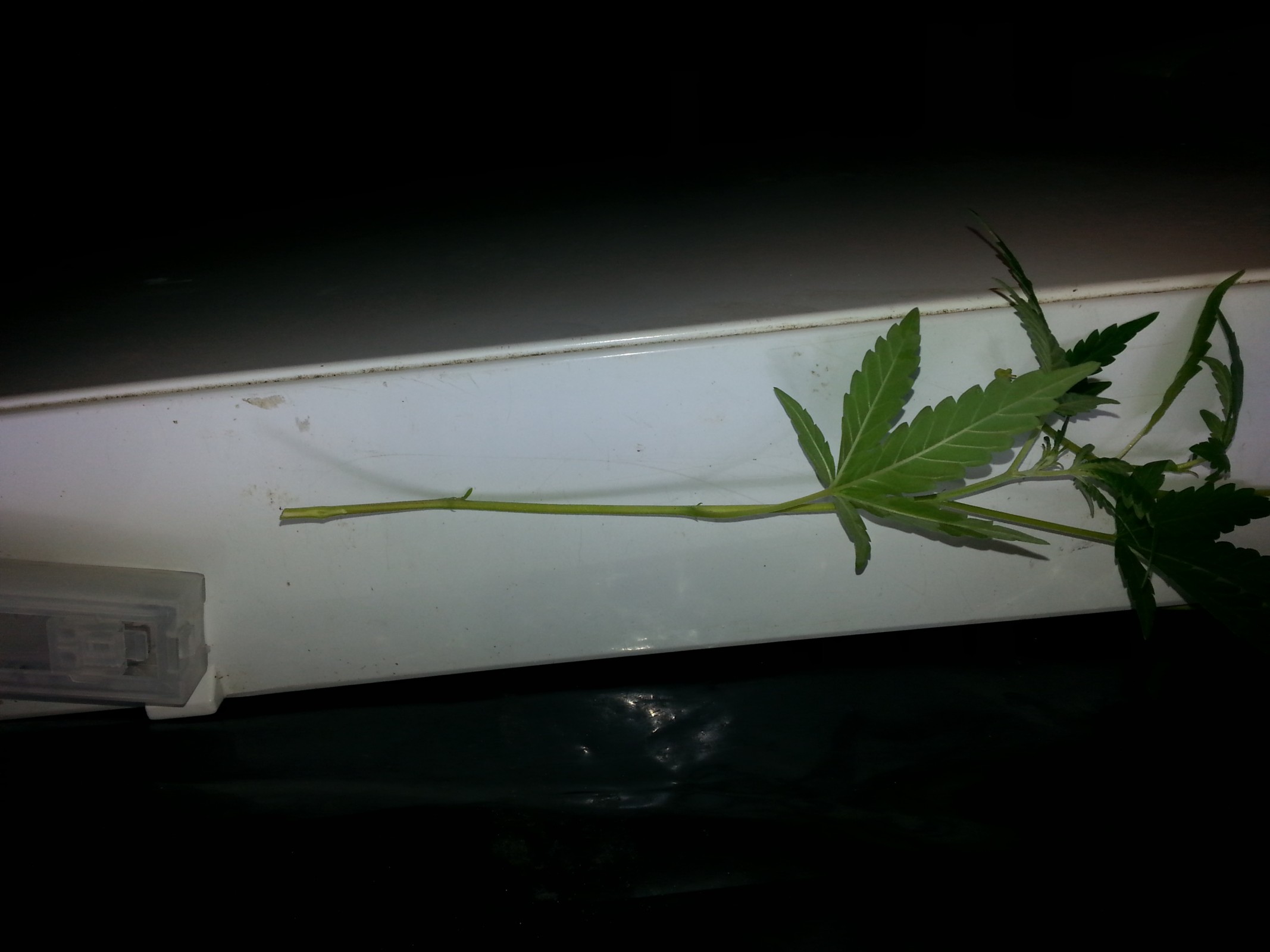 Using a clean razor blade, tops were removed from the rootstock a few cm's above a node,

A cut was made directly into the top of the newly cut stem. 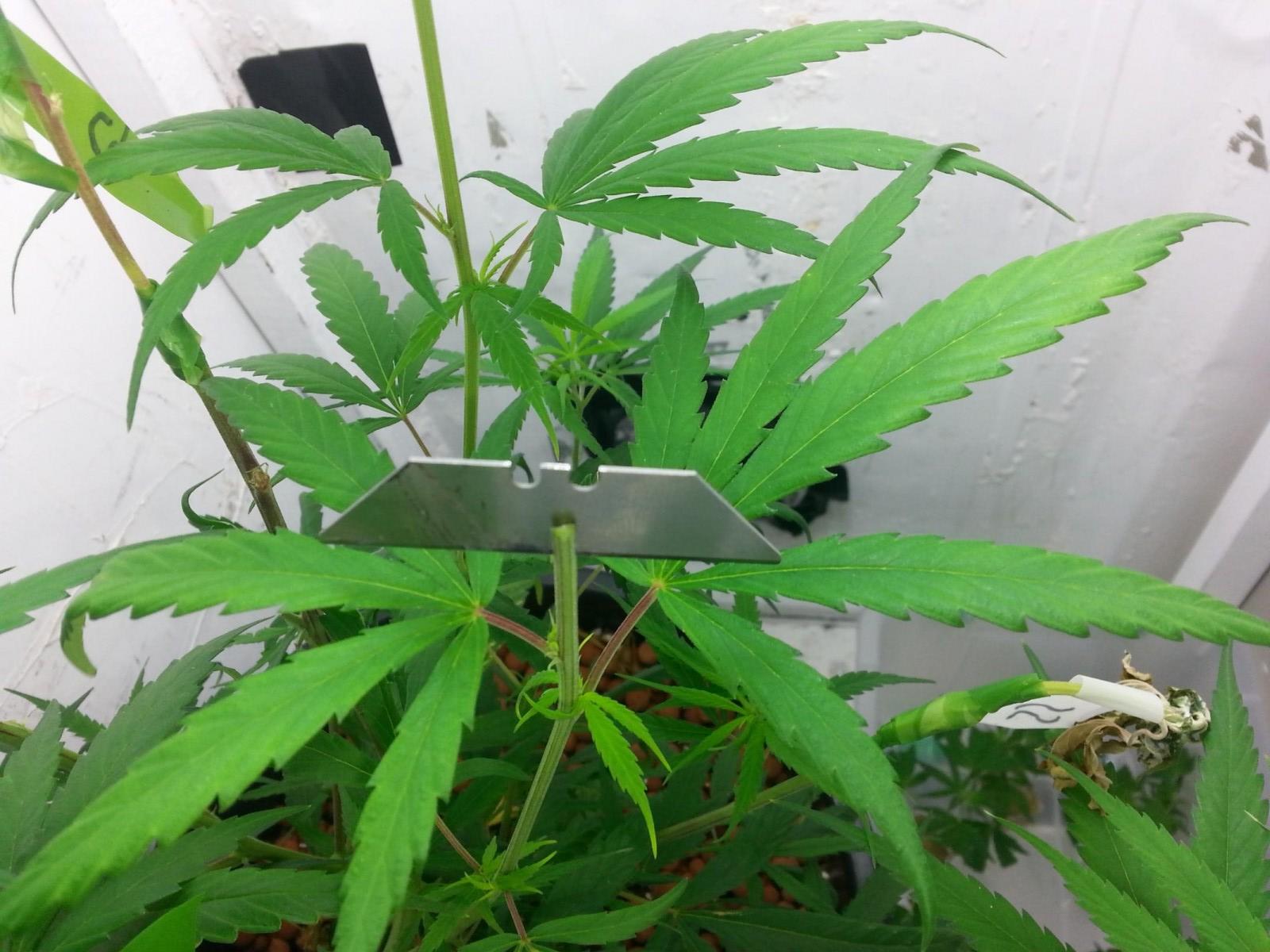 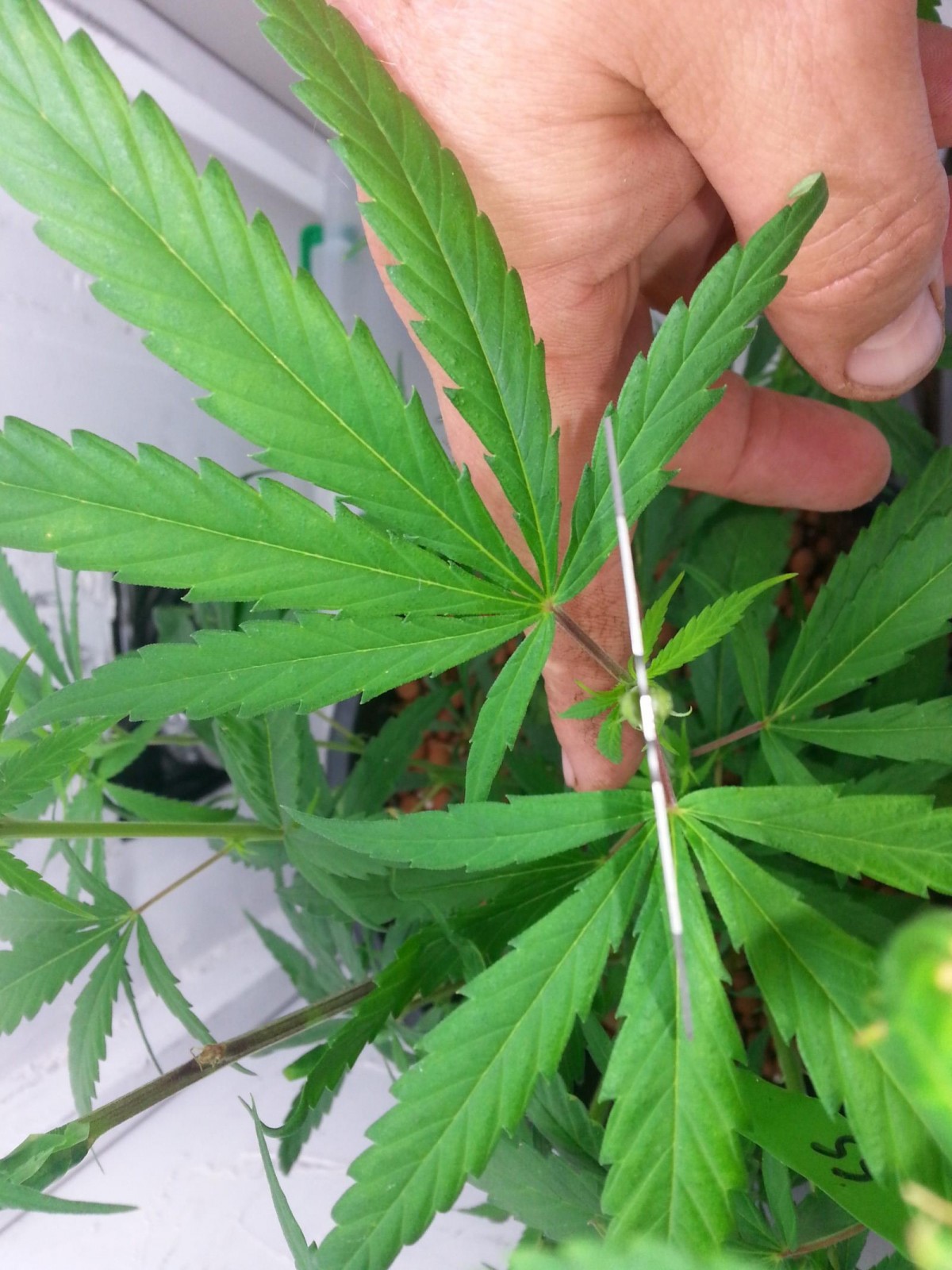 The base of the scion was cut to form a wedge shape, exposing the cambrium layer, before being placed into its new home in the rootstock. 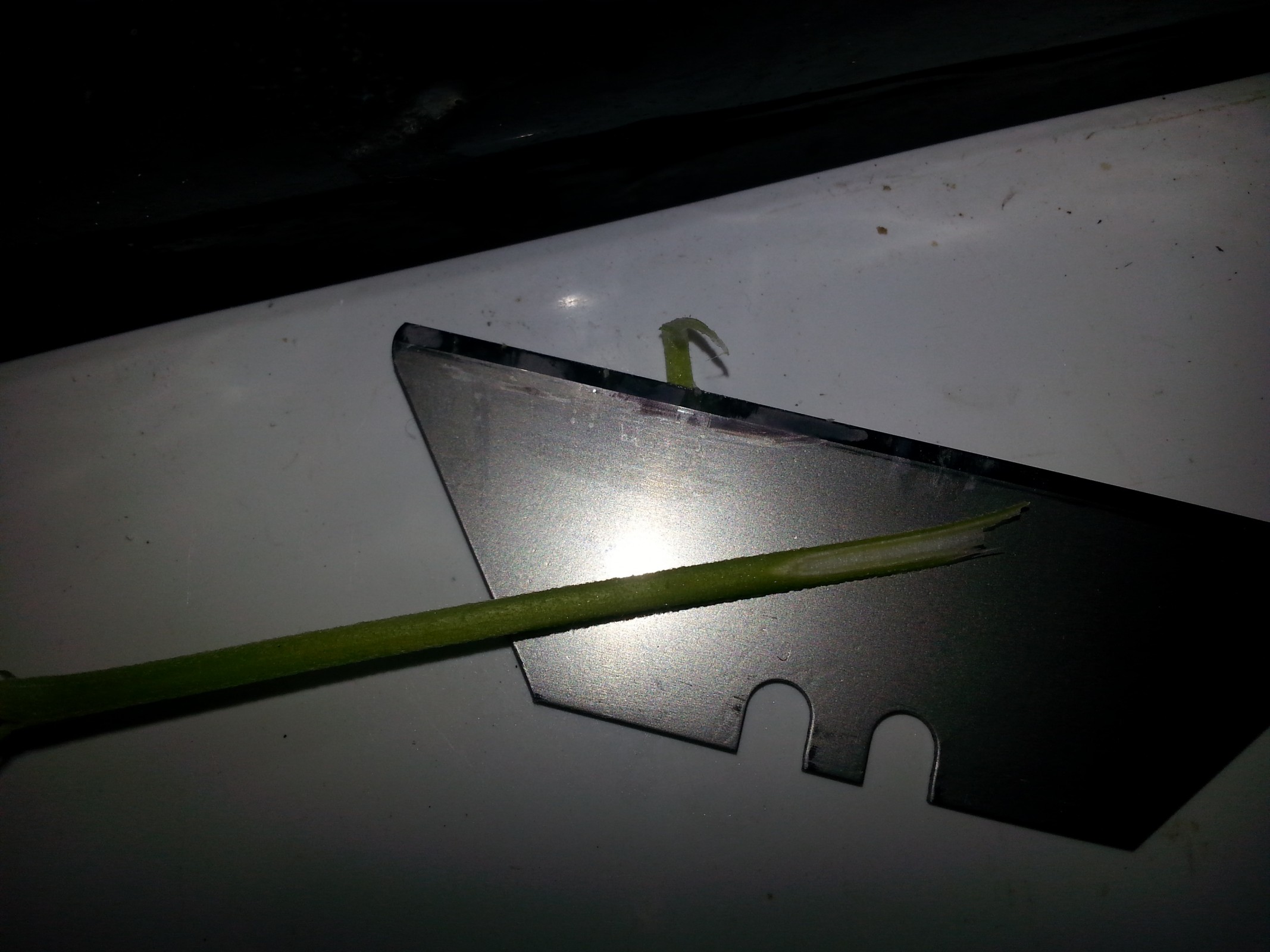 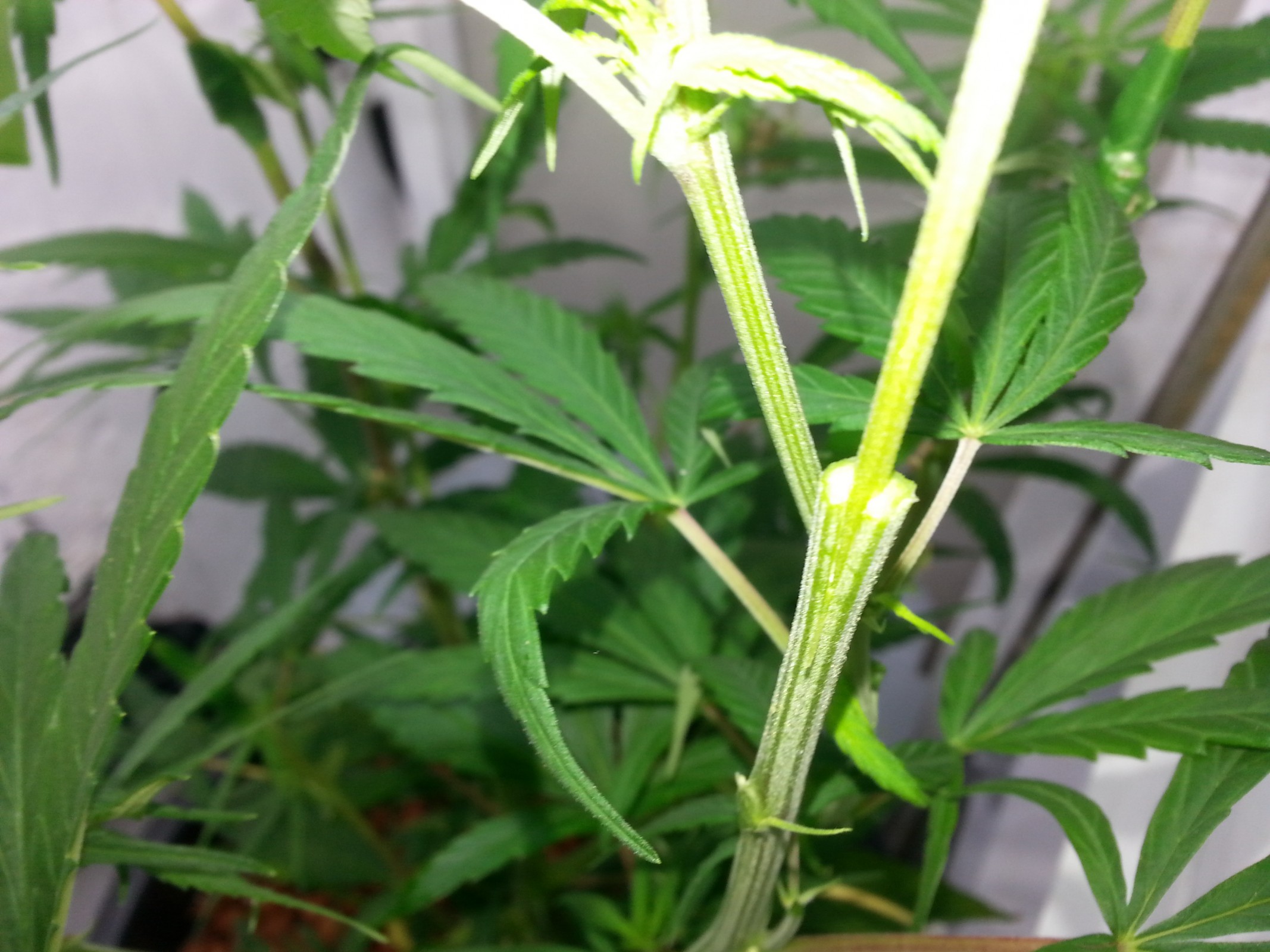 Next, grafting tape was used to seal the two pieces together. 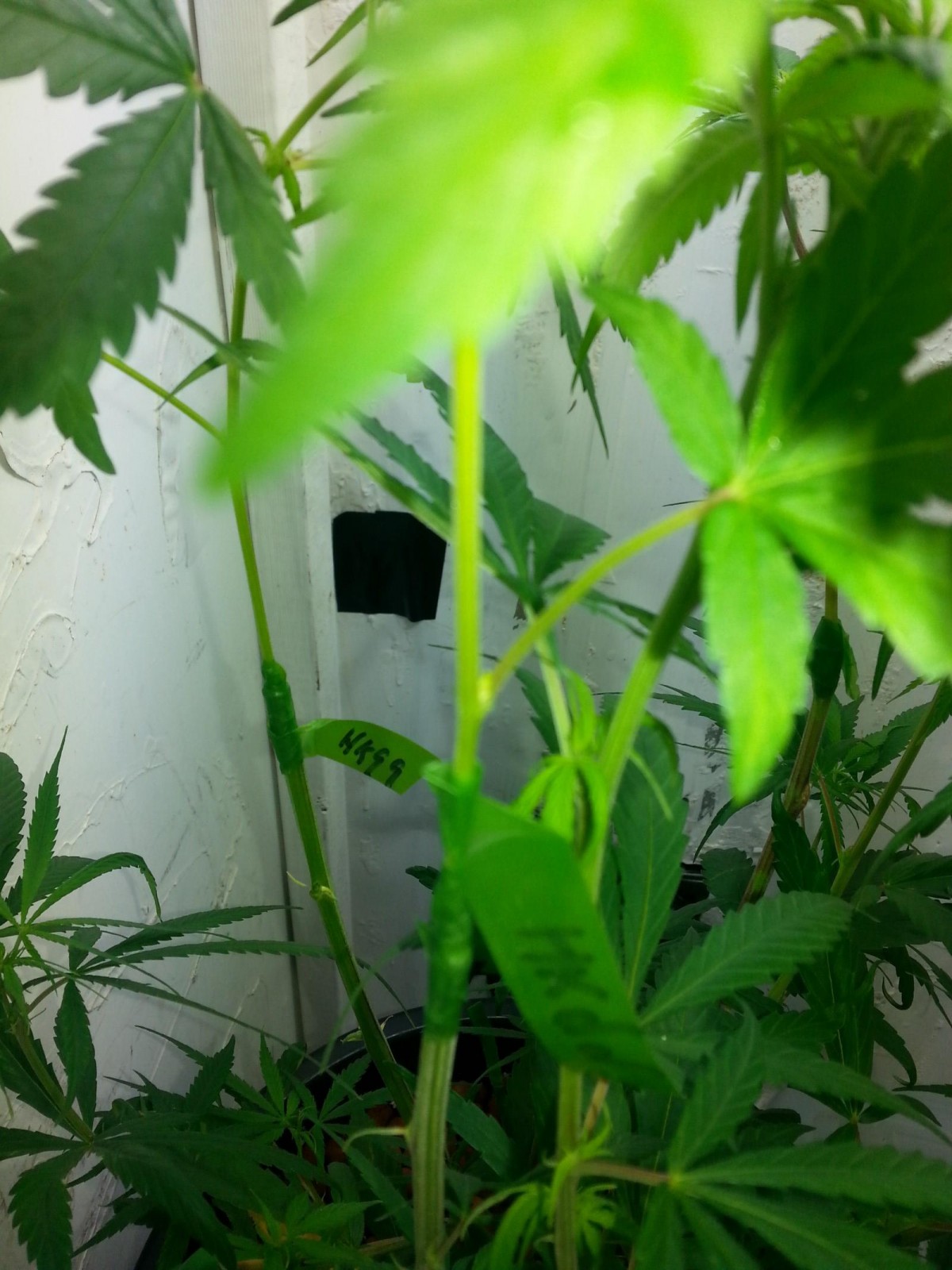 Finally, water was sprayed into a clip seal bag which was placed over the new branch.

For the following week or so, 'till the wound was mostly healed, the bag was carefully opened and sprayed with tap water. 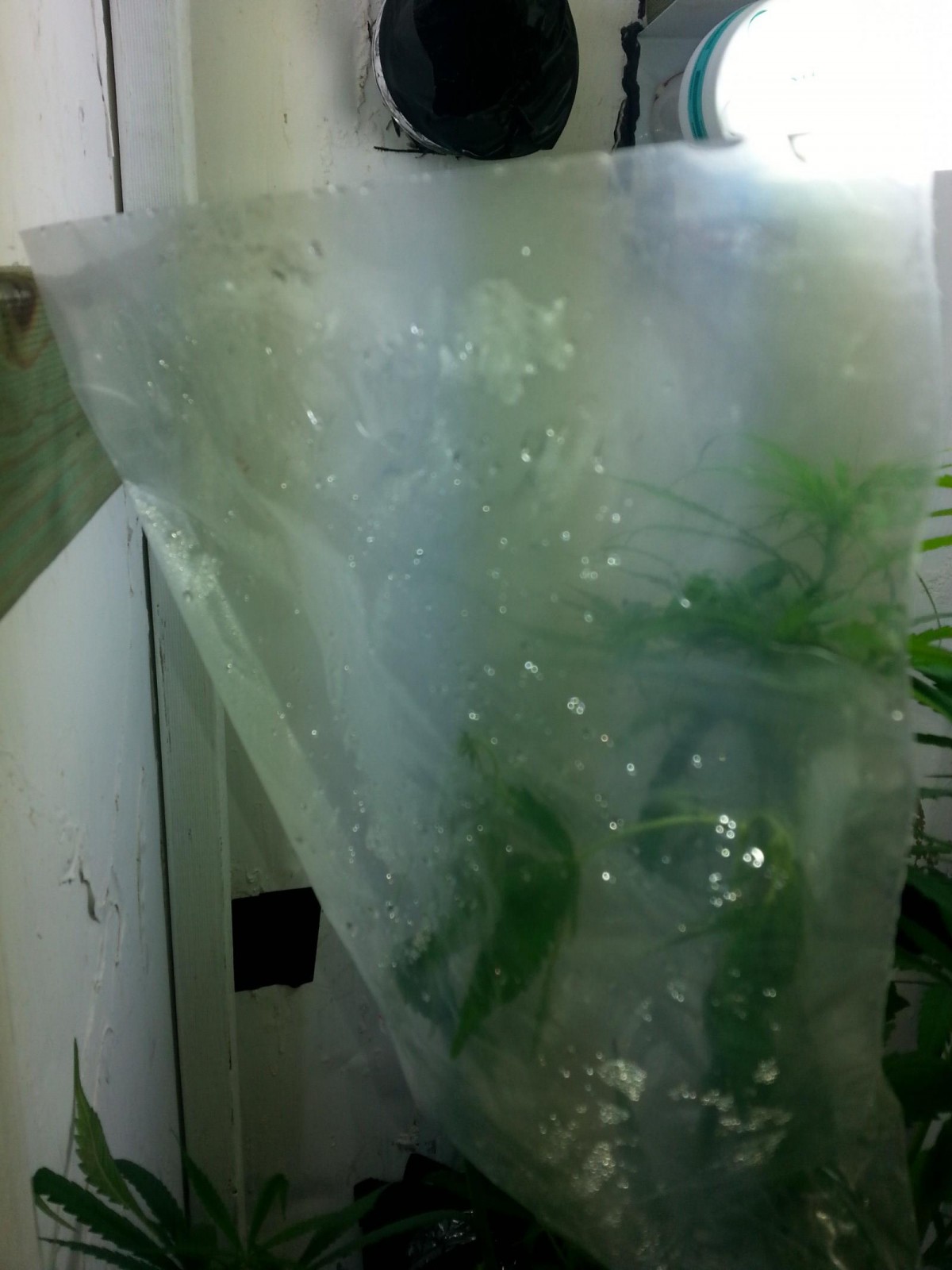 Over the next few days, the new scions began to wilt and look generally droopy and sick. After a couple of days the survivors turned towards the light and perked up again. In this example, there was about a 50% success rate.

Once the new branches were looking healthy again, the bag was removed.

Thanks heaps! Been thinking of giving this a go,but didn't know where to start! Cheers

Nice Ford, i will be watching with interest...

jaikai: couldnt run a choko vine over a shithouse ffs...

Dealing of cannabis/marijuana is strictly prohibited on this site.

I live 5 secs in the past...Dont tell me what happens!

Every now and then I see something interesting, good luck good idea, if it works well i will def use it.Thanks for shareing Ford.

I live 5 secs in the past...Dont tell me what happens!

I just read a post by Matsu about a male plant with female branches answers my next question gonna have to give this a go, I plan a doner plant 2 weeks ahead of 3 or 4 choice donees. Top the donees graft them to the doner mother and grow the topped donees as well. I like it, thanks matsu and ford for the info. Mind blowing fun with canna ha ha.

question... Do you think its possible or have you tried to graft a cannabis cut onto a different plant?

"Of all the things I've lost, I miss my mind the most"

"I have a first place ribbon at doing nothing, its the same ribbon as last place, It's purple"

"I was not paranoid, until people started to follow me"

I took to long between edits, so I will have to finish the write up here.

Once the scions appeared to have recovered the bag was removed 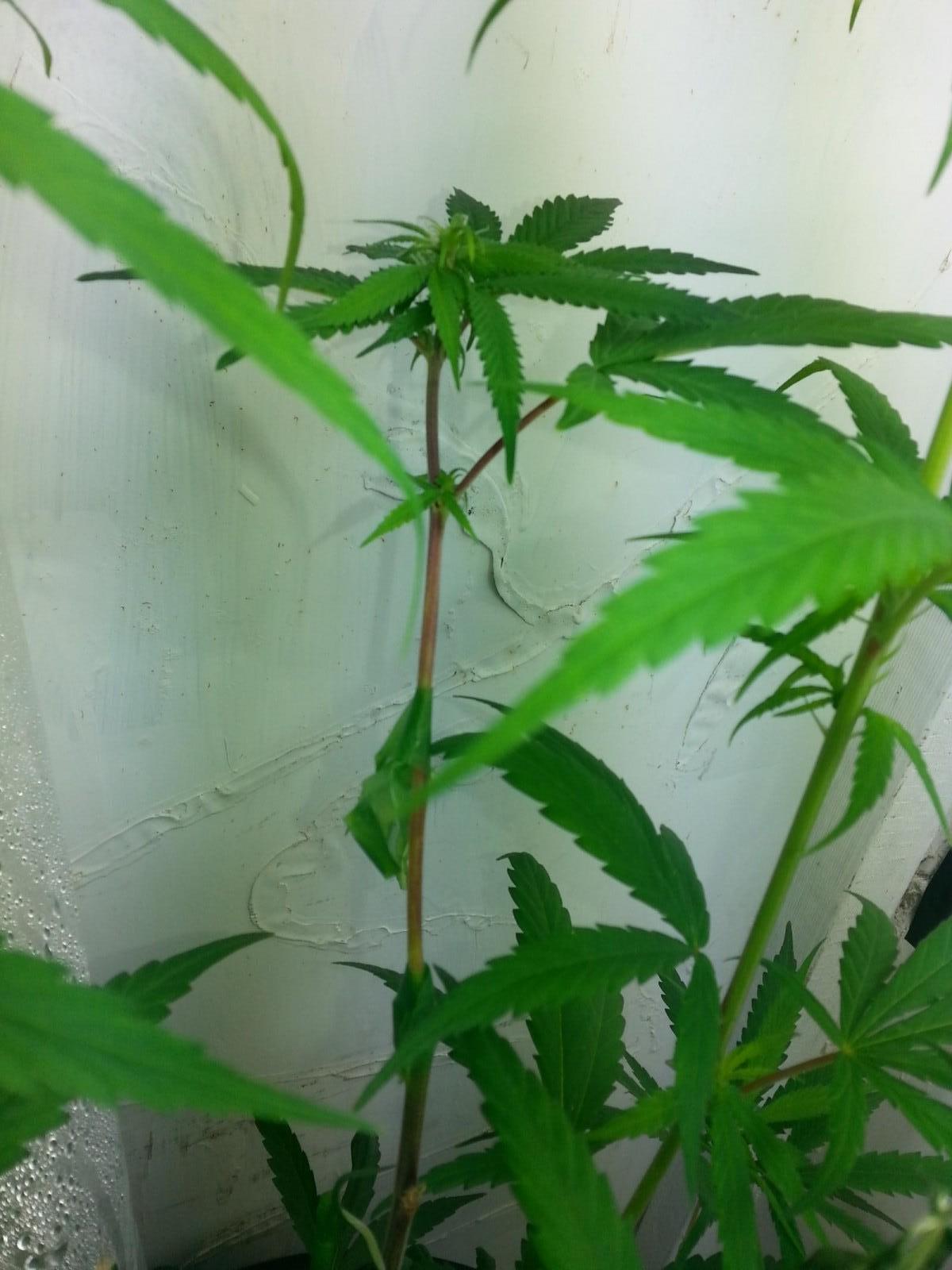 After a few more days the tape was removed to reveal what appears to be a form of  resin, which the plant may have produced to heal itself. 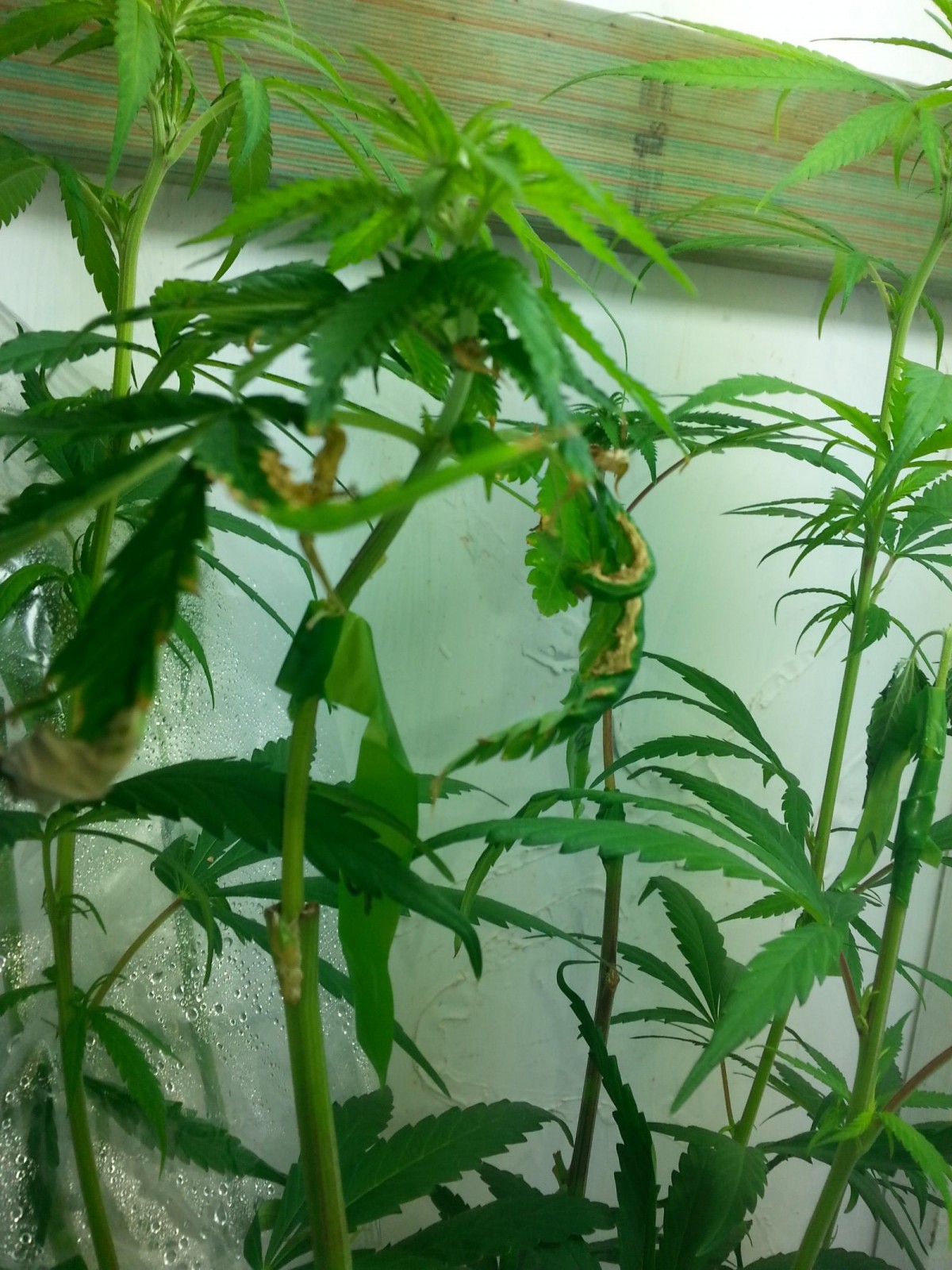 Thanks heaps! Been thinking of giving this a go,but didn't know where to start! Cheers

No problem DailyTokin. It is not a particularly difficult process, go for it!! An important thing to remember is to use clean razor blades and to work fast once you make any cuts.

Nice Ford, i will be watching with interest...

Cheers Ozzy, If veg space is an issue, then I think this is a viable method for keeping numerous strains

Back to Growing Techniques